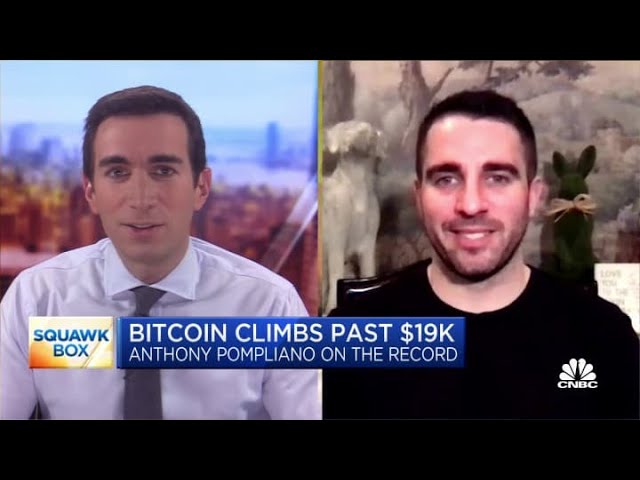 Bitcoin is the winner of a supply and demand exercise: Crypto investor

Bitcoin rouse above $19,000 as it closes in on its record-high price. Anthony Pompliano, co-founder and partner of Morgan Creek Digital Assets, joins “Squawk Box” to discuss where he thinks Bitcoin is headed and whether it’s moved to fast. For access to live and exclusive video from CNBC subscribe to CNBC PRO: https://cnb.cx/2NGeIvi

Bitcoin’s boom may just be beginning.

The cryptocurrency’s comeback could go exponential next year, two traders said Tuesday after bitcoin broke above $19,000 and rallied nearly 3.5%, closing in on its 2017 record highs.

Bitcoin is up over 166% year to date, buoyed by bullish sentiment tied in part to fintech companies including PayPal and Square getting into crypto.

Only 21 million bitcoins will ever be produced.

To try and see where the trade could be headed, Gordon used a concept known as the Elliott wave theory.

“It’s a wonderful way to value crypto because Elliott wave is meant to detect the herding mentality and the emotions driving the price — fear and greed — and it creates very recognizable patterns,” he said, turning to a chart of bitcoin.

“The Elliott wave theory is based on the idea that there’s five waves in a primary trend, three [up]trends and two intervening corrections,” Gordon said.

The first wave higher occurred in 2014, followed by a decline into 2015 and a long-term uptrend through 2018, Gordon said. The fourth wave has formed “sort of a sideways triangle” over the course of the last two years, and the fifth could be bitcoin’s latest wave higher, the trader said.

“The point of all this is a reliable relationship in the Elliott wave theory is the percent distance traveled in that first wave in 2014 is often equal to the percent change in wave five,” Gordon said.

Seeing as the first wave was a roughly 658% rally, Gordon’s target was a lofty one.

Bitcoin climbed to around $19,045.17 by Tuesday afternoon, according to CoinMetrics.

Turn to CNBC TV for the latest stock market news and analysis. From market futures to live price updates CNBC is the leader in business news worldwide.